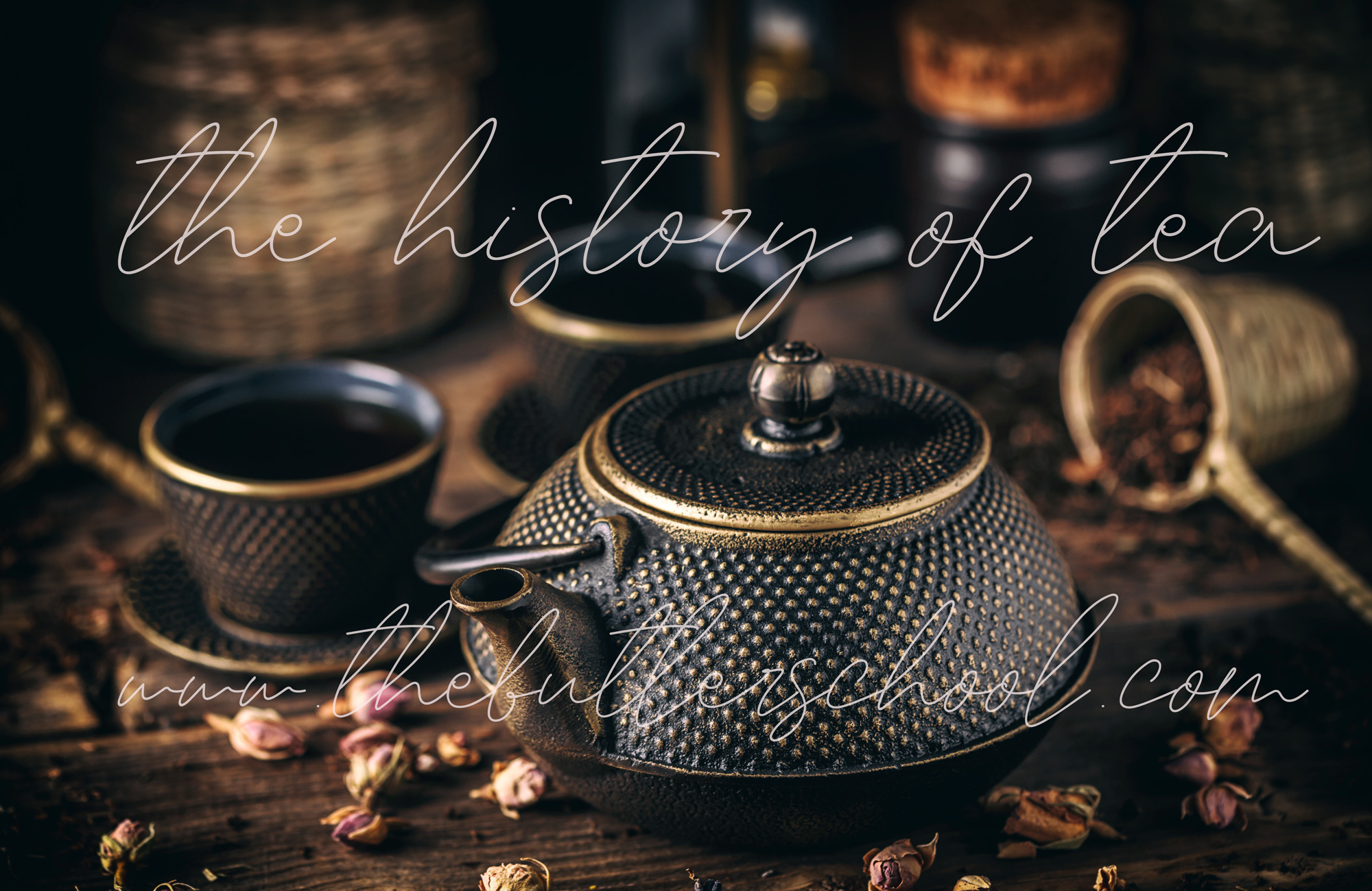 Legend credits the Chinese Emperor Shen Nung with the discovery of tea, way back in the 28th century B.C. He was a fastidious man and always had his drinking water boiled, convinced that this would protect him from the prevalent diseases of the time. One day, while taking a tour of the provinces, Shen Nung requested that his servants boil some water for him.  They made a fire using branches from a nearby camellia bush. Some of the ends of the branches escaped the fire and extended upward. Caught by a passing breeze, a few leaves were released from the branches’ hold and floated down into the heating water. The emperor’s attention was caught by the aroma which arose from the pot. Intrigued, he drank some of the broth and, immediately captivated by the taste and refreshing quality of the brew, the emperor knew he had discovered something of great importance.

The Chinese were familiar with camellia leaves which they used in vegetable relishes and quite probably as part of medicinal compounds, but until the emperor’s discovery, the leaves had never been considered an ingredient of a hot, refreshing drink. News of the emperor’s discovery spread quickly throughout China, and soon everyone was trying the beverage. Before long, tea (known as Ch’a) became an important part of Chinese culture. As the centuries passed and trade with the West opened up, the status of tea increased. Tea was introduced to continental Europe during Elizabethan times, but did not reach English shores until the years 1657-1660. It was the Dutch who first brought tea to the continent, and the Russians also knew about it before the English, as did the Portuguese. It was a Venetian, Gian Battista Ramusio, who was the first European to write about tea.

When tea was finally introduced to the English populace, it was a very hard sell. Enormously expensive and advertised for its medicinal purposes, tea was very slow to catch on in the British Empire. The turning point came when King Charles II came to rule. Charles drank tea throughout the day, delighting in the delicate taste and fragrant aroma for which green teas are appreciated. His habit was adopted first by the rest of the court and then by the entire country. Tea was sipped in homes, in taverns, and in pleasure gardens by the aristocracy as well as their servants. Tea also enjoyed immense popularity in the American Colonies until the late eighteenth century, but when King George III decided to use tea as a source of revenue and raise the import tax on tea sent to the Colonies, the independent-minded Americans rebelled.

The Boston Tea Party of 1773, when colonists dressed as Indians and dumped a ship load of tea into Boston Harbour, was one of the events that propelled the Colonies toward independence, and probably led to a marked preference for coffee in the United States.

Afternoon tea was invented by Anna Maria Stanhorpe, the seventh Duchess of Bedford (1783-1857), one of Queen Victoria’s ladies-in-waiting. In her day, the upper crust ate a huge breakfast, small lunch, and a very late dinner. Every afternoon, the duchess experienced a “sinking feeling”.  One afternoon she instructed her servants to serve tea and small cakes in her boudoir. The experience was so delightful that Anna repeated it every afternoon thereafter. She also began to invite her friends to join her for the additional afternoon meal. Soon others followed the Duchess’ lead, and in just a few decades the custom of “taking tea” in the afternoon had become well established. At first the practice was limited to the upper classes, but it eventually became so popular that tea shops and tea-rooms began opening for the enjoyment of the general public.

The United States can claim two distinct contributions when it comes to tea, and both date back to the early 20th century. In 1904, visitors to the Louisiana Purchase Exposition in St. Louis sweltered in a heat wave and shunned the hot brew offered by Indian tea growers. An Englishman named Richard Blechynden, who was the tea grower’s representation, tried pouring tea over ice in order to entice fair visitors. The result was iced tea, which now accounts for 80% of the tea drunk in the United States.

The teabag began as a brainstorm of an American tea merchant named Thomas Sullivan, who came up with the idea of providing samples to his customers in small silk pouches. Sullivan’s customers soon discovered that the pouches could be put directly (and conveniently) into teapots, and soon orders were pouring in for tea packaged in “those little bags”. Before long, teabags had become a widely accepted means of packaging tea.

A GUIDE TO TEAS AND TISANES:

The various methods by which the tea plant (Camellia sinensis) can be grown, harvested and treated have resulted in an exciting range of teas with distinct appearances and flavours. The choice includes strong, pungent teas; others that are pale and delicately flavoured; green teas with refreshing astringency; and scented teas that are perfumed and flavoured with flowers or fruit.

The best-known teas come from India, China and Sri-Lanka, but many other varieties are grown in countries as different as Kenya, Japan and Russia. The most popular teas marketed are blends of two or more varieties. Tea plants are generally grown in cool temperatures, high above sea level, so that the leaves develop slowly to yield the finest flavour. Teas from the highest territories are usually the most prized.

The leaves of both green and oolong teas are usually left whole and are tightly rolled.  The leaves of black teas, by far the largest category of teas for popular consumption, are sifted and classified according to size.

As well as the range of whole leaf sizes, black tea leaves are often broken up to release more of their natural oils.  Flavourings to enhance the infusions are largely a matter of taste.

Congratulations to Patience on her exceptional ach

Congratulations to @tariqueisrael on his exception

Congratulations Tenaka on your exceptional achieve

Congratulations to @cymon_jay who just won a compl

Happy International Butler Day from all of us at S

Congratulations to a wonderful group of qualified

Congratulations to a phenomenal team of Qualified

Congratulations to Class of July 2021 @simonsigwin

Congratulations to Tenaka who achieved excellence

Congratulations to the class of July 2021. Who all

Congratulations to @hanrivs who achieved excellenc

Congratulations to Ernest who achieved excellence

Congratulations to Jeswill who achieved excellence

Congratulations to Natasha who achieved excellence

Congratulations to Kondowani who achieved excellen

Congratulations to Patience who achieved excellenc